I bought this lovely species from Ecuagenera under the name Dracula trichroma, which apparently is a synonym to Dracula iricolor. Regardless of the name, I love the soft color scheme of the flower in contrast to the traditional provocative Dracula shape. It blooms on an erect inflorescence, which is less common in this genus, with single flowers produced in succession. It is an eiphyte from the cloud forests of Colombia to Northwestern Ecuador where it has been found at a rather broad elevation span of 900 to 2600 meters which makes it fairly temperature tolerant. It traditionally blooms in winter to spring, so I guess we are finally in phase, this being the first bloom since I got it in may of 2011. I grow it potted in the cool vivarium, low light, high humidity, good air circulation and rather wet. I adore this genus and I am very happy to report that I have many more Dracula in bud or in flower, so more on this subject later. 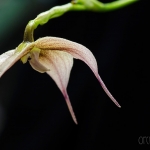 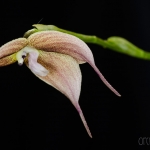 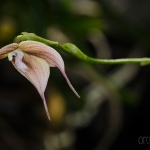 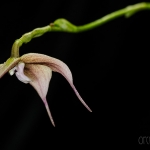 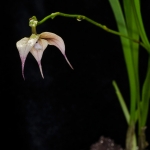