I was picking up my pre-ordered plants from Ecuagenera at an orchid show back in September, and I asked Alex if he had anything special on the table I should consider. He suggested this Masdevallia rex, a species they had only recently begun selling. I took his advice and brought it home, and now it is blooming for the first time. One flower just opened, but there are a myriad of buds coming so in a few weeks it should look really spectacular. I may need to do a photo update then. The flower looks a lot like another nice species, Masdevallia constricta, but these flowers are more than twice as large and quite impressive in comparison to the size of the plant. The body of the flower measures 5 cm long and the sepals 8 cm each.

Masdevallia rex is a warm growing epiphyte from Ecuador where it grows at elevations of 600 to 950 meters. So I grow it as warm as I can, intermediate. On an interesting side note… I gave a division of it to a friend who decided to grow his plant cool. It works, and it is also blooming now at the same time, but the flowers look rather different from mine despite being the very same plant. My flower is much lighter in color and has more white in it. It is also markedly longer in the body and the sepaline tails are probably twice as long as the ones on the division grown cool. You can see the differences here. Kind of interesting to see such concrete differences just due to differences in culture. I grow mine mounted on cork in the small intermediate vivarium where temperatures range between 15-17 at night and 20-22 during the day, medium light, high relative humidity but nowhere near as wet as I grow my other Masdevallia. 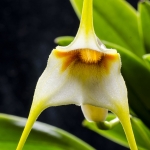 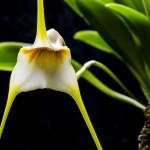 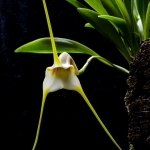 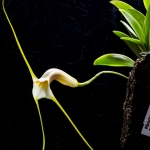 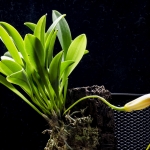 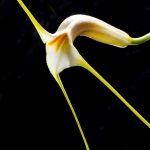 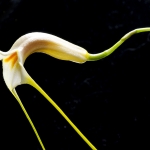 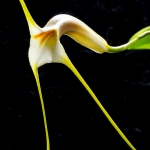 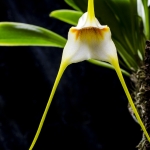 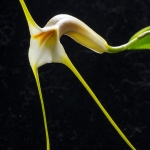