The slipper parade continues, it is Paphiopedilum season after all. Let me present Paphiopedilum Leeanum, a lovely primary hybrid with Paphiopedilum insigne as the seed parent and Paphiopedilum spicerianum as the pollen contributor. It is an old classic as far as hybrids go, registered in Britain in back in 1884 when the orchid hybridization craze was first gaining momentum. Leeanum was one of the first of many successful insigne crosses exhibiting enormous vitality and eagerness to bloom, a quality making insigne very popular in hybridization programs. Once plentiful in cultivation Leeanum is now a bit more scarce even though I feel it is making a bit of a comeback.

Arguably there was no need to improve on the original species in this case, but I think this cross still holds merit as it has inherited all the best from both its parents. The grace and classic lines are still there but the flower is a tad larger and more flamboyant. Having lost a smidgen of the insigne graphic pattern in the sail enough remain to make a statement along with the amazing shape the spicerianum sail adds to the party. Leeanum usually blooms in the winter and the flower has some nice staying power, usually lasting a couple of months or more. It does not requite a whole lot of light and is pretty easy to grow, but with two intermediate growing parents it should be grown as such. I water pretty evenly year round, only slightly drier for a few months right after it is done flowering in the winter. Since both parents are calcareous I add a little crushed sea shells to the potting mix of medium bark and small leca. 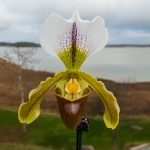 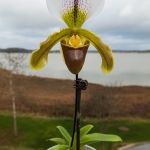 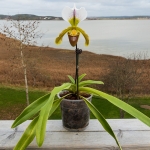 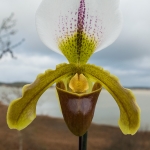 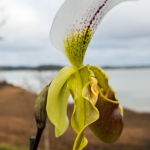 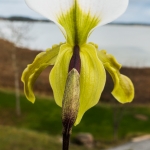 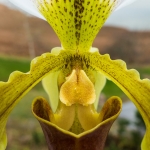